We would like to share with you a case in which we created a promotional video for the crowdfunding platforms Kickstarter and Indiegogo (kickstarter/indiegogo). Platforms such as kickstarter and indiegogo do not need much introduction, but still, let’s say a few words, what is it and what is it for? On such platforms, an engineer, developer, entrepreneur can raise investments to launch their invention or gadget. To do this, a person needs to create a prototype of what he wants to launch into mass production (for example, a gadget) and demonstrate it to users. In turn, any person can, if interested, deposit the specified amount and wait until the required minimum amount is reached and production starts. After that, get the gadget by mail. In case of a shortage of funds, the money is returned to all sponsors back. 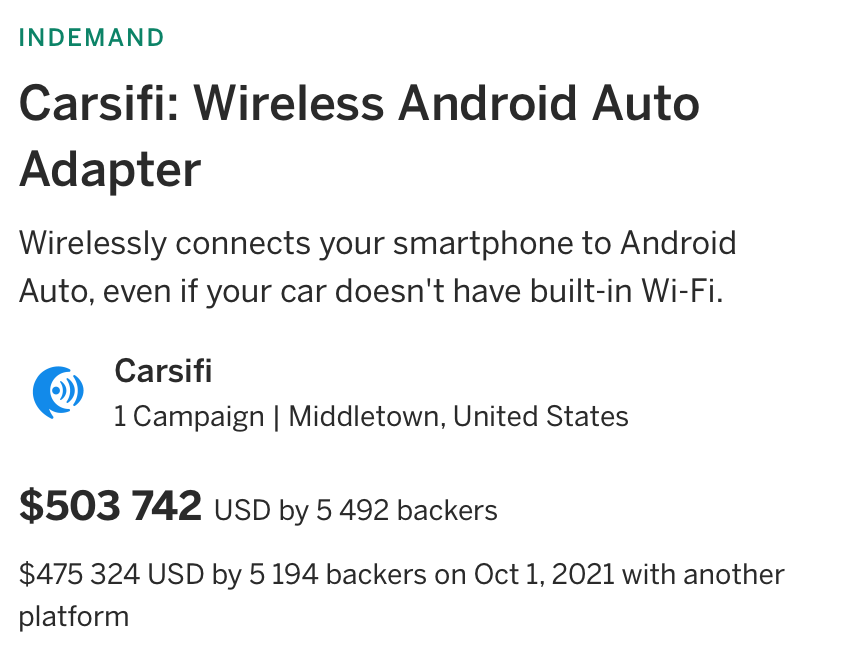 Startup Carsifi approached us with a request for a video clip for Kickstarter. The video should tell the viewer about the problems that motorists have when connecting a phone to a car using cords. After that, we must show the simplicity and convenience of using the Carsifi gadget, which eliminates cords and wires, and also makes connecting to the car’s multimedia system simple and convenient.

Script and creative for kickstarter and indiegogo

Promotional videos for crowdfunding platforms Kickstarter and Indigo should always be clear and simple. This helps users determine if they want to deal with the product or not. Therefore, we decided to offer the client a scenario where we will show the main character, a car lover who loves and cares about his car very much. Also, next we will show how the main character faces everyday problems related to the cords in the car. Cords are being replaced, you guessed it, by Carsifi. A handy gadget that allows you to connect your smartphone to an android car. It is enough to connect only once and then every new time, the smartphone will automatically connect to the system. All you need is to enjoy life, use your smartphone in the usual way, run multimedia on the car display. And all this without cords.

Shooting a video for a crowdfunding platform

Such projects do not have powerful promoted brands, and therefore there are no large budgets for filming video clips. It turns out that our task was to shoot an understandable and good video without attracting a lot of money. Thus, the car and props for filming were organized by the client, we only had to attract an actor and set a date for filming with a film crew.

Since the page on the Kickstarter website needs gif animations, we also filmed individual episodes in advance. These are short video clips showing the use of the product.

Post-production of a promotional video for Kickstarter (kickstarter/indiegogo)

After filming, we had a classic algorithm of actions for such video clips:

As a result, the promotional video for the crowdfunding platforms Kickstarter and Indigo raised more than $500,000, which was enough to launch gadgets into production. It should be noted that after this project, we immediately received several proposals for creating video clips for crowdfunding and not only. If you are interested in such videos, please contact us in the contacts section of this site.

The link to the Indian product page is located here.