What is postproduction? This is the stage of production in cinema, advertising, music videos, when all the material is filmed and it remains to bring it into proper finish. 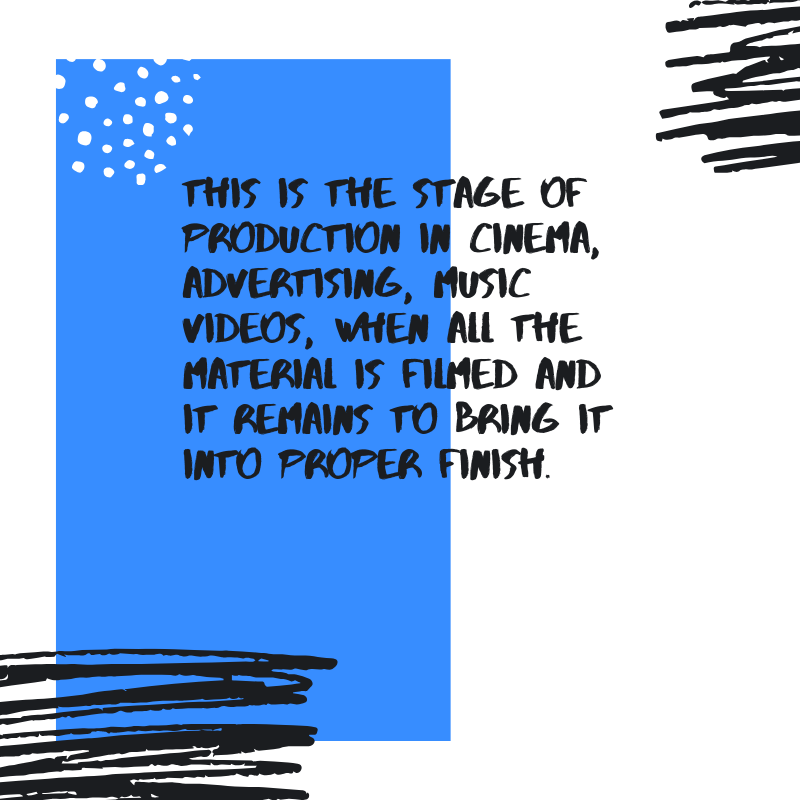 Typically, the post-production stage includes the following types of work:

Draft and finish installation is the process of sorting successful duplicates and gluing them together. Usually, a preliminary draft is done first, so that all participants in the creative process can make changes.

Often, for technical reasons, it is difficult or very expensive to provide ideal conditions for recording sound. Therefore, the actors talk, but the clean voice is recorded in a recording studio.

Most often, the narrator’s voice-over voice is used in commercials, because time is limited, and actions show all processes for a very long time. Therefore, some information has to be clarified and voiced. In good advertising videos, the announcer creates the right atmosphere, jokes, uses slang and more.

The imposition of sounds of nature, the city and other noise

Shooting in the scenery, the lack of the necessary sounds when shooting, the need for specific scoring – these are just a few reasons when you need to create and impose an additional sound line. In addition, the ability to create sound design for post-production adds creative freedom and maneuverability for the director.

Depending on the genre and style of video content (except for music videos), examples of musical compositions are selected, which are approved and transmitted to the composer. If necessary, you can even attract a symphony orchestra, the main thing is that it is justified and there was money.

What is post production for sound? This is mixing and mastering the soundtracks of the project. On any project, a large number of sound tracks are typed from the announcer and actors to inter-noises and music. Therefore, it is important to have a specialist who correctly arranges these sound tracks so that they sound holistically. In addition, mixing and mastering at a professional level allows you to optimize the sound in such a way that the sound range will sound good both on the old TV and on expensive audio systems.

Typically, a motion designer is responsible for creating captions. Together with the director, the text style, font, color palette and more are selected. A motion designer can turn the ordinary appearance of text into an attraction, which will add a lot of appeal.

First, the artist creates sketches or 3D models of characters, then the animator animates them by setting movements. Compositing is a combination of different layers of a video. When shooting video, usually the footage is combined with a painted background or elements. When creating a 3D animation, different layers are also superimposed, but created on the computer.

Professional equipment by default removes material in its raw form, without color saturation. This gives ample opportunities at the post-production stage to give exactly the palette that the author intended. So, for example, the funny plot will be in bright warm colors, and the thriller in gloomy cold shades. The desired mood with the help of color is set at the stage of color correction.

What is good post production without a good script or filming process? Nothing. The converse is also true. A very good script or idea is not enough to write and come up with, and later shoot. It is equally important to correctly convey the correct message to the viewer. Sound, music, color, graphics – all this greatly affects the viewer, therefore, has important value.